Covid City has gotten ugly. I’ve tried often during these past few weeks to write about it, but I’ve been so hyper-focused on not catching the virus, on keeping my kids safe, on creating a loving home inside our apartment despite the invisible threat immediately outside of it, that I haven’t had the energy or brainpower left over to find words for the experience, much less to reflect on it in a meaningful way. But there are things inside of me that need out, and so here I am, writing and deleting and writing and deleting and finally hitting publish.

I know things now. Things I never, ever would have imagined knowing. Like what it’s like to watch EMTs in quarantine gear haul bodies out of buildings, to learn a neighbor has died because a random stranger is now walking their dog instead, to hear sirens blaring all day every day, to watch a demolition crew clean out a dead person’s third-floor apartment.

Out of everything, this last bit of knowledge haunts me the most. I don’t yet know how to describe the sound of furniture being thrown to the ground and hammered into bits, how to explain what it’s like to witness three men destroy an entire home in two hours. They hauled ass, sweating and shouting at one another through their masks as they grabbed and tossed and banged and packed. It was well coordinated, as fast as it could have been. They didn’t leave a physical scrap behind. But god, what a trail of emotional scraps.

As I sat on my balcony and watched, unable to turn away because even if I did I would still have to hear it, I kept wondering, Is there truly no one who wants this person’s things? I love that my mother’s rooster figurines, her recipes, her favorite red plates, are now mine; they help keep her alive. It seemed wrong to me that all those things could just be tossed out of a window. But later that evening, I thought about how, six years after my mom’s passing, we are still dealing with so much of her unwanted stuff. Perhaps people had already come to this apartment across the street, collected what mattered to them, then let the rest go.

My brain replayed the scene all night long, refusing to let me sleep. At around two in the morning, I thought of a new scenario: maybe there were people who wanted those things but were too afraid of catching Covid to come get them. That means they were probably also too afraid to come visit their sick loved one before she died. I wondered how many people across my city, my state, my country, were dying alone in that exact moment.

I wanted to get out of bed and break things. 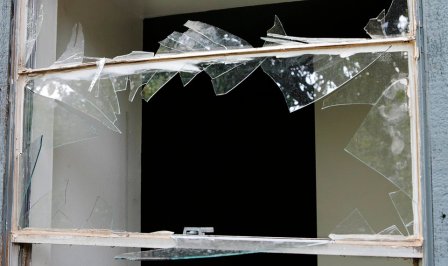 That’s not to say it has all been nightmarish. There are beautiful parts, too. My family is connecting in new ways that wouldn’t have happened before. My meditative and spiritual practice is deepening. I am full of ideas for my art. I’m also exercising more often now that I’m not spending ten hours of my week on a train. And just the other day, I took part in a meeting with the Brooklyn Public Library in which 40 different professionals meditated on Zoom together.

But these small victories don’t balance out or erase the hard stuff. In fact, these little joys make the hard stuff feel even more surreal. When I look out at families eating dinner on their balconies, kids scootering on the sidewalk, drivers honking at people blocking their driveways, my brain struggles to compute how this totally normal scenario is so completely not normal. How is it even possible that the greatest city in the world has been taken down by tiny, disease-filled, death-ridden droplets?

Our super’s adult son, who has been helping with the work around our 60-unit building without wearing a mask, recently tested positive. Around the same time, we also discovered that a five-year-old died from a Covid-related stroke and that a hundred other kids in NYC alone were exhibiting bizarre, inflammatory symptoms linked to Covid. Just two days later, the number of infected kids in the city rose to 145; a teenager, who woke up one recent morning in heart failure, described it as “straight-up fire” in his veins. Doctors don’t yet understand why or how it happens. So much for the saving grace that kids are spared.

The good news is, we have an out: my siblings invited us to spend the summer with them and my nephews in Ohio. Four adults, four kids, two dogs, one roof. It will be crazy. But also, they have a yard and access to a pool. And most importantly, there are only 2,000 confirmed cases in Cincinnati versus 200,000 in NYC.

We are privileged in so many ways. Simply because we are white, we are far less likely to die from coronavirus than our black and brown neighbors. We have a place to flee to, a car to get us there, enough money in savings to spend our 2-week quarantine in an Air BnB surrounded by nature. My job is not on the frontlines and therefore I can continue working from any set-up. And we have supportive, loving family to welcome us on the other end of all this. I am beyond grateful that they have opened their home to us.

But it is possible to be grateful for something and extremely upset about something else at the same time. Leaving the home I made ain’t easy. I loved our little New York life. I worked hard for it, dammit. And we have no idea if we’ll be returning to resume it or to pack it up because who knows when the entertainment industry will return enough to employ my husband again (my income is not enough for NYC rent). We also have no idea what the city will be like by the end of the summer. There is still so much left to just wait and see.

I grieve for the loss of it all, sometimes to the point that I feel sick to my stomach. Yet I am also able to feel all the promise within all the darkness. Everything has changed. I’m making choices I never, ever would have considered before. There is excitement and joy in that, too.

Writer’s note added 5/28/2020: I would like to add that recognizing my privilege wasn’t and isn’t enough. I’m embarrassed that I focused so much on sharing my story and not on examining or reflecting on the ways in which BIPOC are disproportionately dying from Covid, are not being heard or helped by our medical system, and are being murdered by our police officers. I have a platform with my blog and I should be using it to improve society, not just tell my story. I posted some resources today for white people to engage in anti-racism work. It should have been included in this post.