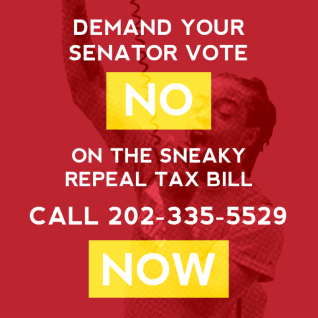 Many of you have been following the progress of this horrible tax bill. The vote is nearing, and we absolutely must put the pressure on Republican senators to not let this travesty pass. It’s not only a back-door ACA repeal but also a total scam, giving the uber rich a break while the working and middle class pay more. How long are we going to allow this corporatocracy to continue, at our expense no less??

Take five minutes right now, call 202-335-5529, and beg these Senators to VOTE NO on this tax bill! When your first call ends, press * to advance to the next call automatically.

I don’t agree with all of her views, but Senator Susan Collins has been a hero on the health care front so far. She has not confirmed her vote either way, but says she is hesitant because of the ACA repeal. Her vote is crucial, so CALL, EMAIL, TWEET HER RIGHT NOW! She knows what’s right, but her party is coming down hard on her. She needs our support. Thank her for supporting the ACA so far, and beg her to VOTE NO.

Having trouble finding the energy to keep it up? From Senator Kamala Harris’s Twitter feed last night (Thurs, Nov 30): The Republicans had to delay votes on this tax bill until tomorrow. They’re rewriting it right now and we don’t even know what’s in it. This is no way to govern. We need you to keep up the pressure & keep up the calls.

“Hello, my name is ____. This tax bill would repeal the ACA individual mandate and increase pressure to gut safety net programs like Ryan White in future budgets. I demand that you VOTE NO on this tax bill!”

It is on us to defend our country, and our work is paying off. Stay strong and pick up that phone RIGHT NOW! Resist!!