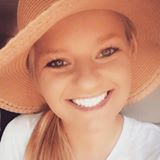 “Vet school is really hard but I like it, it’s interesting. Apparently, though, vets have a higher rate of suicide than any other profession. It’s Wellness Week here so they were handing out suicide prevention stickers today, and an email they sent said that one in six veterinarians will consider suicide. That’s nuts. An article popped up in my Facebook feed, I don’t know how credible it was, but it was talking about how when an animal comes in that’s really sick or can’t be cured and you can’t make it better, you euthanize it, you go ahead and put it out of its misery, and the article said that vets might associate that with their own life when they have a problem that they feel like they can’t fix. If I were an animal, this is how I would fix it. The article also attributed it to the stress. People don’t take the time out of their day to call someone and tell them they did a good job. People just don’t do that. They only call to complain, so if you’re taking care of someone’s animal that means the world to them and it didn’t go the way they wanted it to, that can be stressful. I luckily haven’t had to do it yet; it will definitely be the hardest part of the job.

The work I did in South Africa was kind of boring, to be honest. It was interesting to me because I got to do it in Africa, but the whole point of it was that trees were dying off and not coming back. I did preliminary research to see if it was worth investing more. Elephants can knock a tree down pretty easily, and they also smack their trunks against the trees and rip the bark off. If there’s a circle of missing bark, the tree will die. So, we set these traps to catch rodents to get an idea of what types of rodents were there and what densities, then we put them in enclosures to give them seeds and see if they would eat them because people were saying that rodents were eating the seeds and preventing new trees from growing. We mainly caught mice, rat and squirrels. It’s funny, when you think of Africa, people want to research lions, buffalo, rhino, not really the rodents. But what we found with the seed trials is that they do eat some of the seeds, so you can’t definitively say that they are eating enough seeds and that’s why the trees aren’t growing, but really it’s like, we did the research, they eat the seeds, it’s worth looking more into. It was really cool to be there. The first two weeks were not research, I was there on a study abroad course. We went around with a game capture specialist and caught buffalo, giraffe, we moved animals that’d been sold, it was really cool. Sometimes they relocate rhino, too, since they’re heavily poached. So, the first two weeks we were actually staying in tents. Sometimes you could hear animals walking around or a lion roaring way off in the distance. It was cool, but the scary part was if you had to go to the bathroom at night. But when I did the research, I stayed in a house. It was pretty cool to see everything and how they do it all. 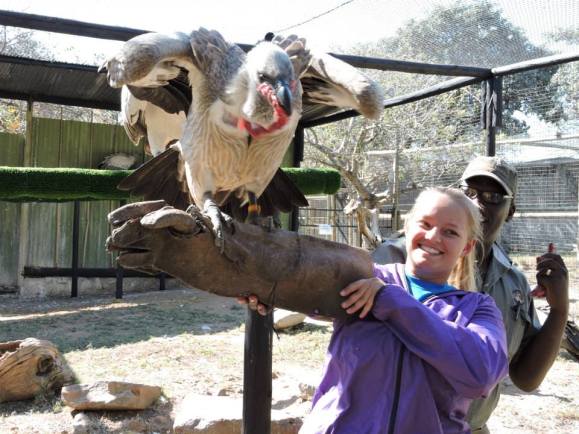 Ideally, I would like to work in some type of wildlife rehab place or a zoo. At Auburn, experience with that is pretty limited – we don’t have a huge wildlife program, you have to get it in bits and pieces and then apply for internships and stuff like that. In one of my classes, we work hands on, one week we alternate and work with dogs and then the next week with cows. I was actually surprised by how much I liked working with the cow. It’s easier because whenever you’re working with cows, they’ve usually been brought up to a barn with their head in these metal bars so they can’t walk away from you. It’s more relaxing out in a barn, less stressful. With dogs, you can get an aggressive dog who tries to bite you, bite your techs, you sometimes have to muzzle it or even sedate it, so that can be dramatic. Cows can get stressed out, too, but it was easier. I liked it, but I wouldn’t want to just work with cows… It can be pretty hard to get into zoo medicine, so my back up is to work in a regular small animal clinic. I would want to get board certified in exotics so that I could work with birds, small animals like chinchillas; really anything other than a dog or a cat can be considered exotic. I mean, you don’t have to be board certified to see a rabbit, but if someone brought in a sick squirrel or something, that would be fun. So, we’ll see where it goes!”

Welcome to We the People, a column featuring stories and profiles of your fellow Americans because we the people of the United States need to meet one another. Click here to learn more.